On Sunday, March 6, 150 or so Frenchman, Poles, Germans, English, Chinese, Japanese and Russian runners took part in the Baikal Ice Marathon. There may have been other Americans in the race, but I didn’t meet any. About a third of the participants competed in the half marathon, running 13.1 miles to the midpoint of frozen Lake Baikal and then hopping in hovercraft to complete the passage. The rest attempted the full crossing, 26.2 miles from Tankhoy on the lake’s eastern shore, to Listvyanka on the west. In its twelfth running, BIM lived up to its billing as one of the world’s most spectacular and toughest marathons.


On the morning of the race, gentle snow was falling on the sleepy ski resort of Baikalsk, where we athletes stayed, a harbinger of what was to come. We ate a quick breakfast, loaded our luggage onto a truck to be carted around the lake, and boarded buses for the 75 km journey to the starting line in Tankhoy. The bus ride would have been familiar to most marathoners, excited runners chattering and gawking out the windows, except that we were gliding along on an unplowed highway through birch forest in the grip of heavy frost and two feet of snow.

Upon arrival at the start line, we clambered into the Tankhoy Visitors Center, nestled against the lakeshore. Its rear window offered a splendid view of Baikal and our ribbon-like course cut through the snow. It twisted toward the horizon and disappeared into the mist.

Like many others, I spent most of my time at Tankhoy in a cue waiting to use on of the two toilets available on site. Porta potties, evidently, have yet to reach Siberia. Our projected start time of 10:00 to 10:30 (“11:00 at the very latest”) eventually had us lining up about 11:15. The logistics of organizing eight or ten hovercraft, a dozen or so snowmobiles and sundry volunteers spread across 26 miles of ice are no doubt daunting. Eventually, though, and with very little fanfare, the command to start was sounded and we were off.

The plowed course was narrow. As a result, we began running single file with our left kept free as a passing lane. Over the first few miles, we sorted ourselves out, passing one another and being passed until we were more or less organized from fast to slow. The early part of the course offered a good running surface. The race crew had repeatedly plowed the track in days leading up to the race, leaving a dusting of snow over the ice. Perfect! I was zipping along, dreaming of the finish line and already congratulating myself on a job well done.

Five or six kilometers into the run, the course began to change. The wind was blowing snow back onto the track and we had to hop over small drifts. Not so bad. A few kilometers more and the track disappeared completely. We were quickly forced to abandon the “track”  and bushwhack through ungroomed snow.

From there on—the last 20 miles of the course—it was tough going through ankle deep snow. Footing was suspect and nearly all of the runners, me included, fell into the trap of weaving back and forth searching for terra firma, or rather snowa firma, that simply wasn’t there. That translated into stumbling, twisting ankles, stubbing toes and putting leg muscles through torture.

It was unbelievably slow going. You could see forever, so, looking up, you’d perceive the snaky line of runners stretching ahead of you for miles. They were moving too, so you never got any closer to those objects on the horizon. In fact, because they were moving faster than you, you were falling farther behind. Occasionally, an unmoving, mirage-like object would appear on the horizon—one of the hovercraft that served as aid stations—and you would fixate on it like a castaway spotting a passing ship. Trouble was, it took ages, eons really, to reach that point. Once there, though, it was time to celebrate. That meant hoisting a glass of lukewarm tea with the Russians manning the station. Ваше здоровье!  (To your health!) You could also help yourself to the odd assortment of goodies—chocolate bars, nuts, cheese—all frozen solid. Then it was back to the grind.

To dwell on the difficulty of the task, however, is to miss its magnificence. Lake Baikal is colossal. Standing in its midst, you are witness to an unvariegated plain of white. A few miles into the race, you are wholly enveloped by a sparkling void. Now and again, you would come across a patch of the black ice for which the lake is famous. Staring down into this hazy prism you might glimpse fantastic objects fossilized in the frozen mass, or perceive liquid water far, far below. It was then that you could fully appreciate your position, gliding along on a thin veneer of glass above nearly a mile of abyss. BIM’s unique admixture of brutal conditions and otherworldly beauty is what gives the event its mesmerizing appeal.

Somewhere past the half marathon point, the eastern shore became vaguely visible. With each slowly passing kilometer the outline of snowcapped mountains became clearer. With 10K to go, it was possible to make out the outline of our pink 1960s vintage hotel in Listvyanka. The finish line! Seeing it was literally cold comfort as I knew, at my present rate of progress, it would be a good two hours before I got there. Predictably, the going only got slower from that point forward. Not only was there no relief from the snow, but the wind picked up and we encountered sections where splintered chunks of ice lay just below the surface.  Footing became more precarious.

I was beat, but my spirits were good. I began singly out loud to my iPod playlist. I’m not sure what other runners thought of my unaccompanied version of Mick Jagger, (“Star, f*** a star, fu*** a star, f*** a star.”) but no one seemed to mind. The language of love in universal.

No road goes on forever. I eventually arrived at the finish line, greeted by an adoring crowd of two Russians. I beat it to the hotel, found my luggage and spent a good 30 minutes under a cascade of hot water until my body temperature returned to normal. A little while later, I joined all the participants for a celebratory feast of tasty Siberian cuisine washed down by beer and toast after toast of водка (vodka). 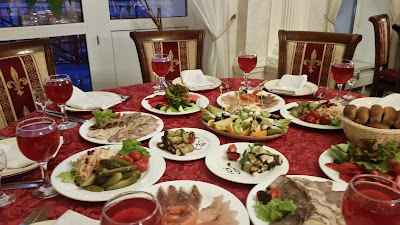 I didn’t do this on my own. I owe thanks to many people for the great privilege of participating in this incomparable event. My enablers included Anna and Michael from the Sydney-based adventure travel agency 56th Parallel. My months of pestering questions were inevitably met with a reassuring “Don’t worry!” from Anna. That is sagacious advice for anyone visiting Siberia. (If you ever have a yen to travel to that uniquely wonderful part of the globe, 56th Parallel should be your first call.)

Absolute Siberia, the organizers of this event, rendered astonishing service, managing our meal and hotel accommodations, arranging for a small armada of buses, trucks, snowmobiles and hovercraft, preparing the course (even if there best efforts were undone by the Great Baikal), hosting the banquet and promoting good cheer. The race is ostensibly a charitable event meant to raise money to preserve the lake, but I suspect the economic windfall is small vis a vis the titanic effort it entails. Rather, I assume these warm and hardy Siberian folk simply enjoy sharing their wonderful environment and culture with outsiders capable of appreciating their magic.

Signing up for four days of pre-race training turned out to be a stroke of genius. It not only afforded me the opportunity of scouting the lake in advance of the race, it brought me under the wing of Arkadiy Kalikman, our trainer, veteran of every running of the Baikal Ice Marathon and three-time winner. He gave us loads of advice about taking on this challenge and urged us to be philosophic in accepting whatever came our way. “Man proposes. Baikal disposes.” I expected to experience the great lake, I had not thought I’d encounter a man who embodied its spirit in every fiber of his muscles and bones. What a joy! Now 68 years old, Arkadiy zipped past me at the 15 km marker and finished an hour ahead of me.

I also owe deep gratitude to the other six runners who took part in the BIM training program, Ed (UK), Sabrina (French from Moscow), Camel (Belgium), Alexander (German/Russian from Moscow), Alexander's French wife Oud (I’m sure I got that spelling wrong), and Pierre (France). We instantly became BFFs, did everything together and became mutual agents of encouragement and support. At the concluding banquet, when the finishers’ medals and tee-shirts were handed out, a clerical error caused me to be passed over. After going to bed, the others tracked down the race organizers, retrieved my goodies and presented them to me in the morning. What pals! 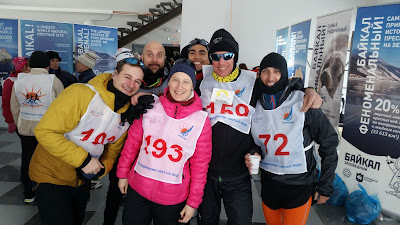 The beginning, middle and end of my support system is, of course, my beautiful, wonderful wife, Linda Rosner. She not only immediately approved of my plan to travel more than halfway around the world to run on a frozen lake, she encouraged it and facilitated every detail and step. I am the luckiest man alive. 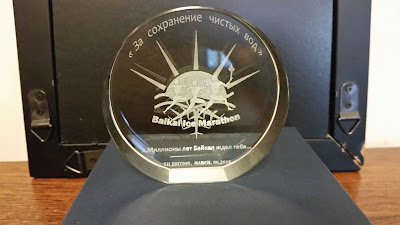