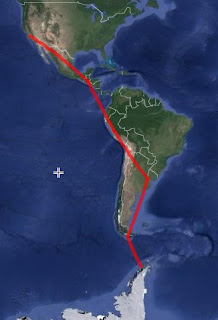 When I first began running, my friend, Angela Brunson, shared with me a wise maxim for choosing races: “Never sign up for an event where you’ll spend more time getting there, than on the course itself.” In other words, a 10K that’s an hour’s drive from home is too far away. In two weeks, when I walk out my front door and head toward the starting line of the Antarctica Marathon, I’ll be violating Angela’s advice by stupendous proportion.

The journey for me and my intrepid support crew (my wife, Lindi Rosner, and our friend, Debra Kaufman) will begin with a 20-minute car ride from home to LAX. We’ll board a 5-hour flight to El Salvador, followed by a 4 hour flight to Lima, Peru, followed by a 4 ½-hour flight to Buenos Aires, Argentina. There, we’ll meet up with other marathon adventurers and do a bit of sightseeing before taking yet another flight, this one lasting 3 ½ hours, to Ushuaia, at the tip of South America.


We’ll spend the next two days retching over the side of an aging Russian steamer as we cross the roiling waters of the Drake Strait. Add  in the layovers, four or five security checks, time cooling our heels on tarmacs, a visit to Eva Peron’s grave site, and assorted other bits of waiting around, and travel time tots up to eight days, give or take 12 hours! Surely, I can run the marathon faster than that. 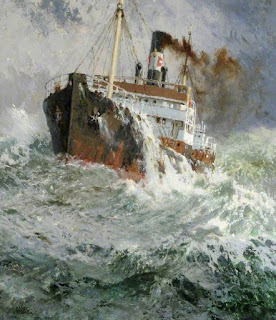 And still…we won’t end up in Antarctica! The marathon takes place on King George Island, one of the South Shetland Islands. It lies 75 miles off the coast of the Antarctic Peninsula, a tapering finger of land that curls northward from the Antarctic mainland toward Tierra del Fuego.

If you dozed off during ninth grade geography, you may be surprised to learn of Antarctica’s immensity: 14 million square miles, twice the size of Australia. So, if you are picturing this marathon as runners in parkas making their way in bone-chilling cold through a vast expanse of white, you’re mistaken. King George Island rests at 62 degrees south latitude. The South Pole is at 90, nearly 1700 miles away. While, even in summer, the weather can be nippy at the pole—temperatures of 40 below zero are not uncommon—things are much more temperate on balmy King George. Hence, it’s nickname: the Maui of the Southern Ocean. (All right, I made that last bit up.)

I’m quibbling, of course. This race will be challenging, even for a hardened old Goat like me. And the difference between being on the island and on the mainland is inconsequential. A penguin could swim the narrow channel in an hour. On her back. I also realize that “The South Sheltland Marathon” lacks the branding panache of a race with “Antarctica!!!” in its moniker. Can’t fault the organizers one iota. Still, if I were running the show, I might choose a name more accurate and descriptive: The Madness of King George. 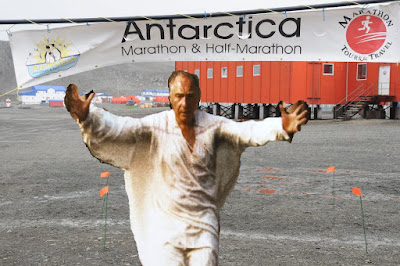 Posted by Keith Gayhart at 6:19 AM