When I talk to my friends about running in the Sub-Artic in winter, their first thought is, naturally, “It must be cold!” Fahrenheit readings that begin with a minus sign cause many people to imagine themselves shivering from their eyebrows to their toes. But, from the point of view of competitors in events like the Yukon Arctic Ultra, cold is not a freezing issue, it’s a management issue. Wear the right gear, keep moving and you won’t feel cold. I spent more than seven hours in sub-zero conditions yesterday and the only time I felt cold was when I stopped at the water station at the halfway point of the marathon and when I took off my gloves (as my fingers instantly ached). Otherwise, I was toasty. 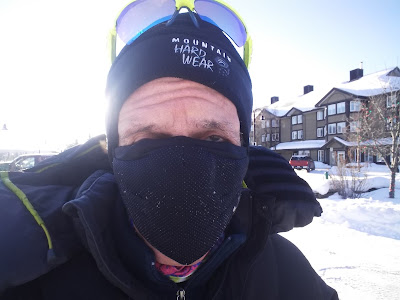 The cold affects runners in other ways. It’s a simple fact of physics that wearing extra clothing and carrying extra stuff causes you to move more slowly. Breathing is harder when the temperature is minus 10F, especially if you feel obliged to keep your nose and mouth covered, as I did for most of the day. Your muscles don’t react with the same bounce as when the weather is balmy. Add snow, both in the form of a compacted base layer and a few inches of newly fallen flakes, and progress becomes harder still. It resulted in a long day for me.

Most of my gear performed flawlessly, but I did experience a few bumps in the snowmobile-groomed trail. I kept water in a pair of plastic flasks on a belt that I wore beneath my coat. Although I initially filled them with near boiling water, it began to freeze after an hour. Refilling them at the one water stop turned into a Keystone Cops fiasco and I ran without water for the second half of my race. The gels and nutrition bar I had tucked in a pouch against my belly also froze. The gels were a total loss, but I did manage to gnaw through a frozen bar. Imagine pulling a cube steak from the freezer and consuming it immediately. My “rugged” sports camera failed during my training runs. (Alas, I have no photos from the race.) My iPod went belly-up an hour after the start.

The marathon course began on the frozen Yukon River, proceeded north for 13 miles, then turned west along the Takhini River. Both rivers are girded by rocky hills covered in pines. Cold and snow are an intrinsic part of the landscape’s beauty, which is awe-inspiring. For 10 miles during the second half of the marathon, I encountered not another soul. I love this place!

My experience in the race contrasted with the pesky funk that consumed my three prior days in Whitehorse. Staring out the window of my hotel room at the slate-gray sky dotted with frozen clouds of steam, I was tormented by self-doubt. I told myself that it was too cold, the terrain too formidable, that I was not up to it. I was sure that I would drop out midway, or, worse, require a rescue. I berated myself for coming all this way on an old fool’s errand. I whined on the phone to my wife like a spoiled schoolboy. 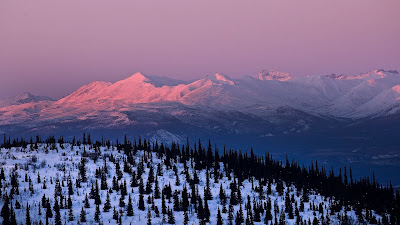 In the event, the race was every bit as challenging as I feared and the going as tough as I predicted. Maybe more so. It left me bug-eyed and pushed me to the limit. But what I had failed to consider, what I underestimated and dismissed, was my will. A few hundred yards into the race, I made up my mind to see it through and never wavered. 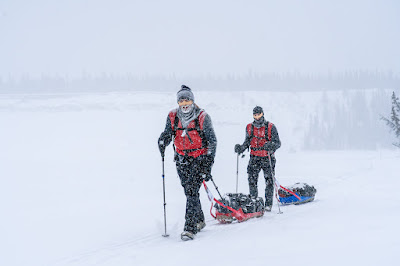 I mention this because I believe self-doubt afflicts many people. It doesn’t only pop up when preparing to run a marathon in the Yukon. It rears its head in a hundred forms and innumerable circumstances in our daily lives. On the job, in our relationships, when we’re out and about, most of us experience moments when we feel that we’re not up to snuff, want to drop out or require a rescue. It can make life hard. 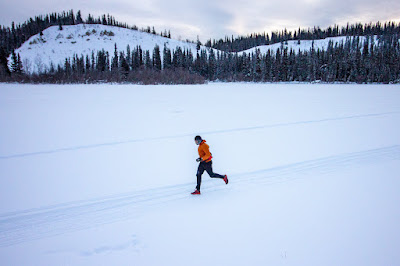 Of course, I didn’t have to travel all the way to Whitehorse to confront my negative thoughts but coming here gave me an opportunity to examine self-doubt up close, see how it operates and consider what brings it about. I found that it wasn’t the indomitable beast I imagined and discovered that it didn’t tell the whole story. I don’t think I am in any way unusual in this. I believe we all have it within us to face down paper tigers of our own creation and embrace our inner strength…and it doesn’t have to happen at 17 below. 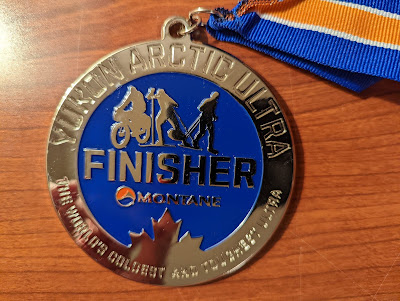 (As my camera failed, I "borrowed" a few of the above photos from the event FB page.