This is the biggest weekend of the year for Yukon sports, but it may surprise faithful readers of My Polar Adventure to learn that the race I’m participating in, the Yukon Arctic Ultra, isn’t even a blip on the local radar. Here in Whitehorse, dogs are king. This morning it appeared that half the residents of the town, as well as tourists, photographers and journalists from Japan, Germany, England, Brazil, Australia and other points along the globe, filed out in the morning chill to watch the start of the Yukon Quest. 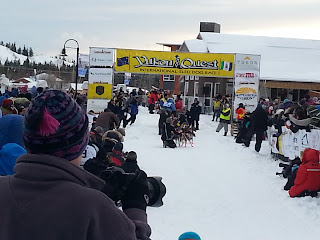 The Yukon Quest is a 1,000 mile (!) dog sled race that runs from Whitehorse to Fairbanks, Alaska. That’s a bit longer than its more famous cousin, the Iditarod, earning it Kudos as the longest event of its kind. It’s been held in February of every year since 1984 often in bone chilling cold. 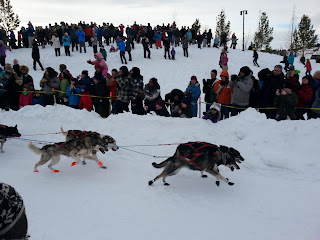 The Quest goes to considerable lengths to assert its commitment to canine health and welfare. The event website insists that the mushers take better care of their animals than themselves (although by the looks of some of those gents and, yes, ladies, I’m not sure that’s a recommendation). The dogs certainly appeared to be wildly happy as they sluiced through the starting shoot, but I wanted to call out to them, “Slow down, guys! It’s not a 5k.” 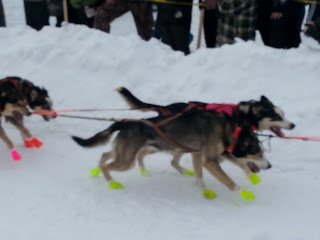 Twenty-six sled teams set off this morning on a journey that could take up to 16 days. The favorite to win is—I kid you not—a fellow named “Lance” who is a cancer survivor and has already won the race four times. Expect him to do it again and then, six months from now, sit down with Oprah to tearfully confess that, yes, it’s sort of true, his dogs were on dope. 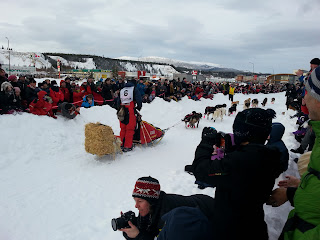 Tomorrow morning when we runners tee it up, there’ll be no throngs of adoring fans, no photographers, no journalists, no Lance. Let’s face it, even the most adventurous of us bipeds are running less than half the distance of those fleet, four-legged hounds.
Posted by Keith Gayhart at 4:28 PM