In his classic story To Build a Fire, Jack London describes a chechaquo, or “newcomer,” who attempts to walk between a pair of small mining camps in the Yukon during the days of the Klondike Gold Rush. It was a very cold day. Impossibly cold. Seventy-five degrees below zero Fahrenheit. So cold that the man's spit froze before it reached the ground. Participants in the longest distance of next month’s Yukon Artic Ultra, 430 miles, will retrace the steps of London’s fictional protagonist on the frozen Yukon River south of Dawson. (As a marathon participant, I will run on the same river, but a few hundred miles to the south.) 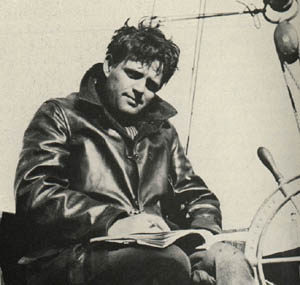 The Klondike Gold Rush was a singular event in the history of Yukon. News of gold strikes in the remote Canadian territory reached the United States in 1896 and caused a “stampede” of miners dreaming of riches. More than 100,000 set out on the perilous journey. Fewer than half reached their destination and most of them experienced more frostbite than fortune. Digging for gold in the permafrost was absurdly difficult, meaning that most of those who managed to strike the mother lode did so not by mining but by selling claims to other prospectors. The boom lasted all of three years. 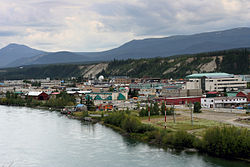 As the chimera of the Gold Rush faded, Yukon, too, receded from view. Its population in 1901 of 27,000 declined precipitously and did not again reach that level until the 1990s. Today it barely tops 30,000 frigid souls, most of whom live in Whitehorse. It’s perhaps not surprising then that even a small event like the Yukon Arctic Ultra (83 participants) provides a welcome economic boost to the local population. Especially lucrative is the business of rescuing runners overcome by exhaustion or cold.

Alas, no rescue teams came to the aid of Jack London’s hero. He suffered a series of setbacks along his trip culminating with a pile of snow that drops from a tree and extinguishes his life-saving fire. From that moment, his fate was sealed. 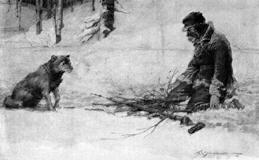 Notably, London does not attribute the man’s failure to a lack of preparation, poor gear, bad luck or even his obvious hubris. “The trouble with him was that he was without imagination," London writes. "He was quick and alert in the things of life, but only in the things, and not in the significances.”

My fellow YAU travelers are unlikely to encounter anything like temperatures of 75 degrees below zero, and will be well equipped to avoid  life-threatening mishaps. I am confident that the chechaquo in my group have plenty of "imagination" and are acutely aware of the "significances" of running in a cold and unforgiving environment.

P.S. Current weather forecasts suggest race day temperatures in the Whitehorse may top 10 degrees ABOVE zero. If Jack London were to join us, no doubt he would run in his skivvies.

Posted by Keith Gayhart at 8:53 AM