One afternoon, midway through our trip, I joined other passengers on the deck of the Akademik Ioffe and watched amazed as humpback whales played in the water below. There were two or three alongside the ship, each a good 20 feet long, and dozens more spread out to our left and right, fluke-flipping, fin-slapping, barrel-rolling and thrusting their knobby heads out of the water, those nearest so close, we could look them in the eye. This played out as we skimmed along the western side of the Antarctic Peninsula, its coast a seemingly endless chain of rugged mountains and smooth glaciers. We passed icebergs the size of city blocks, ivory white above the water, cool aqua below. The humpback show went on for more than an hour. 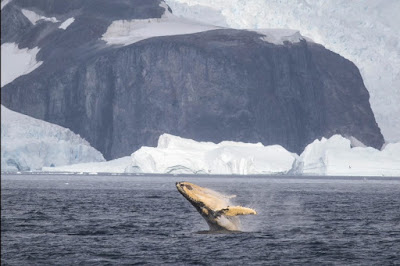 The 18th Antarctica Marathon took place over two days, March 6 and 7, 2017, on King George Island, but our visit to the southern continent involved much more than a foot race. We spent five days touring the South Shetland Islands and the Antarctic Peninsula. Aside from race day, our time was devoted to “excursions” of one kind or another, each incredible and impossible to adequately capture in words or photographs. We visited colonies of Gentoo and chinstrap penguins, flightless birds, awkward on land, but torpedoes in the water.  We strolled along a beach dotted with hundreds of sunbathing Weddell seals and their monstrous elephant seal cousins, some more than ten feet long. One morning, we hopped into kayaks and piloted those plastic cocoons below towering glaciers and through fields of brash ice and small bergs. 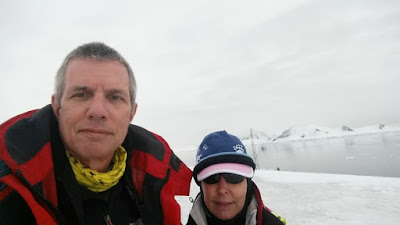 Our staging base, was the Akademik Ioffe, was a Finnish-made, Russian-owned former research vessel, refitted for Antarctic tourism use. It was like a floating summer camp. Our hosts included staff from Marathon Tours, who ran the race, and One Ocean Expeditions, who orchestrated the tour, as well as Russian crew who piloted the ship and provided galley and housekeeping services. They worked together with cheerfulness, expertise and precision, anticipating our every need and feeding us like prime livestock. 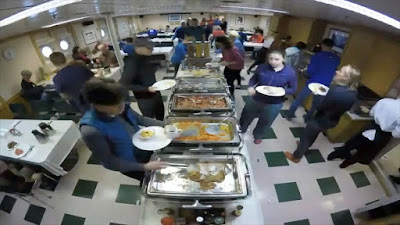 The tour delivered on every promise in abundance both in terms of our encounters with Antarctica’s profusion of wildlife and exposure to its breathtaking landscapes. Along with the shore excursions, we were treated to wildlife and history lectures, polar-themed films, and assorted other shipboard antics. Even our crossing of the fearful Drake Passage was better than we could have hoped as we spent two days gliding across glassy seas disturbed by barely a ripple. (As I write this, we are making our return crossing amid a bit more rolling, but at this point, we are sated and more than happy to loll about on our bunks.) 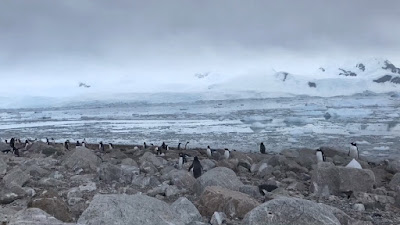 We enjoyed the excellent companionship of our 100 or so fellow passengers. Most were Americans, but they also included a smattering of Europeans, Asians, Aussies and Kiwis. About half came for the marathon, a dozen or so others took part in the half marathon and the rest, including my wife, Lindi Rosner, and our friend Debra Kaufman, came along as supporters. Quite a few of the people on board were members of the Seven Continents Club, and about two dozen of those completed their goal of running a marathon on every continent on this trip. All had interesting experiences to share. 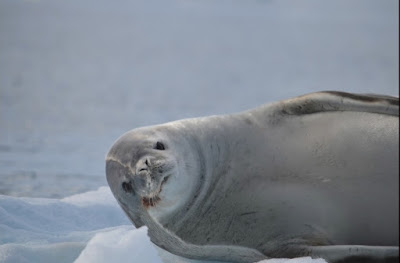 As to the marathon itself, it was as unusual and formidable as its setting. The race took place on King George Island as staging a race on the continent proper would be difficult to impossible. For one thing, the shoreline is almost everywhere marked by sheer rock faces and glaciers…getting inland is not easy. King George is much more accessible and home to research bases from several countries. In fact, the marathon course was confined to a rugged service road connecting Russian and Chinese bases. 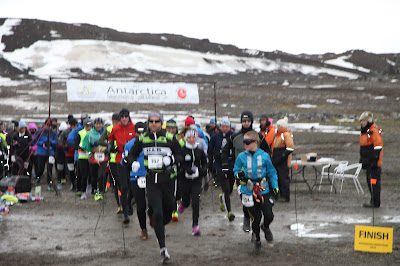 On the morning of the race, runners left the ship, piled into inflatable rafts called Zodiacs and were transported to shore. We slipped off our outer wear, assembled at the starting line located just a few feet away, and shortly thereafter, and without particular fanfare, set off. We were joined by several “local” runners from the Chilean and Chinese bases. (The Chileans proved formidable runners, finishing 1-2-3 in the half marathon.) The weather was about as favorable as one might hope. The temperature remained within a few degrees of freezing with a persistent 10-15 mph wind. The wind became a bit stiffer as the day wore on.

The course snaked inland a short distance from the landing spot, and then rambled over a series of short, sharp hills and above a number of tiny inland lakes, before curving back toward shore near the foot of an enormous glacier. At that point, we did an about face and ran back to the starting point. End-to-end, the course was only a little more than two miles long, so to make 26.2 miles, we had to repeat the out-and-back six times! 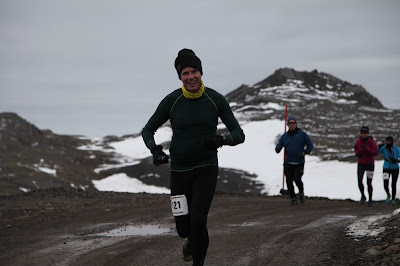 The race organizers explained that this curious course was chosen to maximize comradery, and it did do that, but it also had practical advantages. Antarctic land use rules precluded setting up traditional aid stations. Instead, each runner simply cached a few water bottles at the start/finish and at one point along the way. Confining the race to a single, short section of road also lessened our impact on the regular activities of the research facilities.

So, we spent the morning and part of the afternoon running up and over the same hills, trudging through the same patches of sticky mud, stumbling over the same rocky sections, and exchanging high fives and encouraging words with the same runners, walkers and race staff, again and again! The event reminded me of the movie Groundhog Day, except where Bill Murray was able to learn from and improve on his experience with each repeat, my performance declined with each lap from carefree lope to miserable shuffle. I had a rough day, but I make no complaint. It was an event unequaled in my quixotic running career. 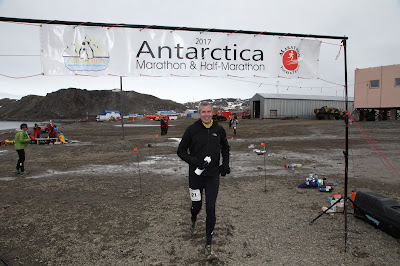 In short, I am a very lucky fellow to have had an opportunity to visit this magical place and compete in this one-of-a-kind event. Three cheers to Marathon Tours, One Ocean Expeditions and the crew of the Akademik Ioffe for their outstanding and friendly service. I also owe immense gratitude to my wife, Lindi Rosner, and our friend, Debra Kaufman, for tagging along and lending their unwavering support.