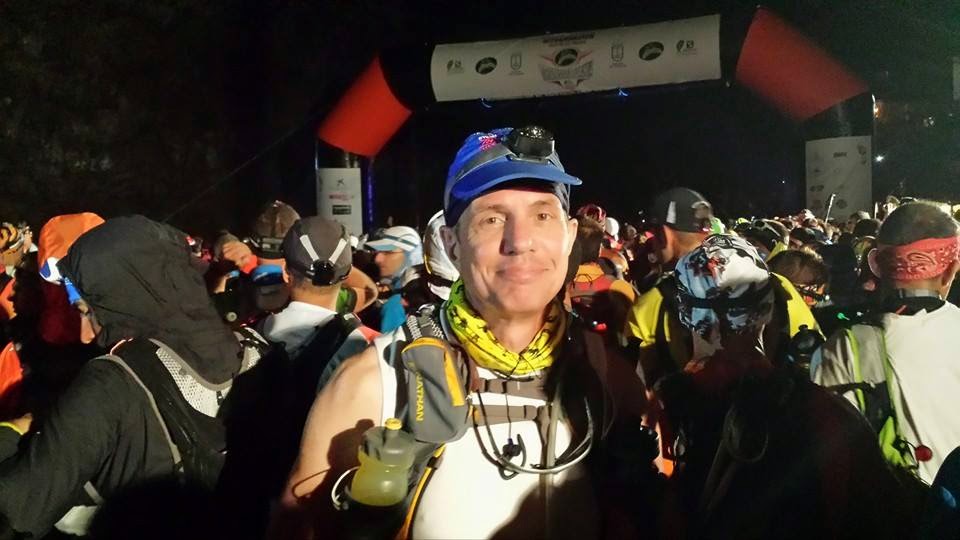 The start was slow and chaotic as runners tried to squeeze onto a narrow trail that led away from the lighthouse at Fuencaliente and began snaking up the side of the volcano. They looked like ants scurrying about madly after someone has stepped on their anthill.

The first portion of the race involved a relentless climb up the spine of the volcano. Runners went from 100 feet to nearly 8000 feet, virtually without break in the uphill grade. The trail was well established, but rocky making for difficult footing. The landscape was glorious. The volcano is covered in dense pine forest and yellow and purple wildflowers were in bloom. Runners were treated to splendid ocean views to their right and left. At this point, it was difficult to distinguish that the landscape was a volcano; it looked like an ordinary mountain, except that the trail was covered in a layer of sand-like ash, that, like sand, got everywhere, into shoes, nose and throat. 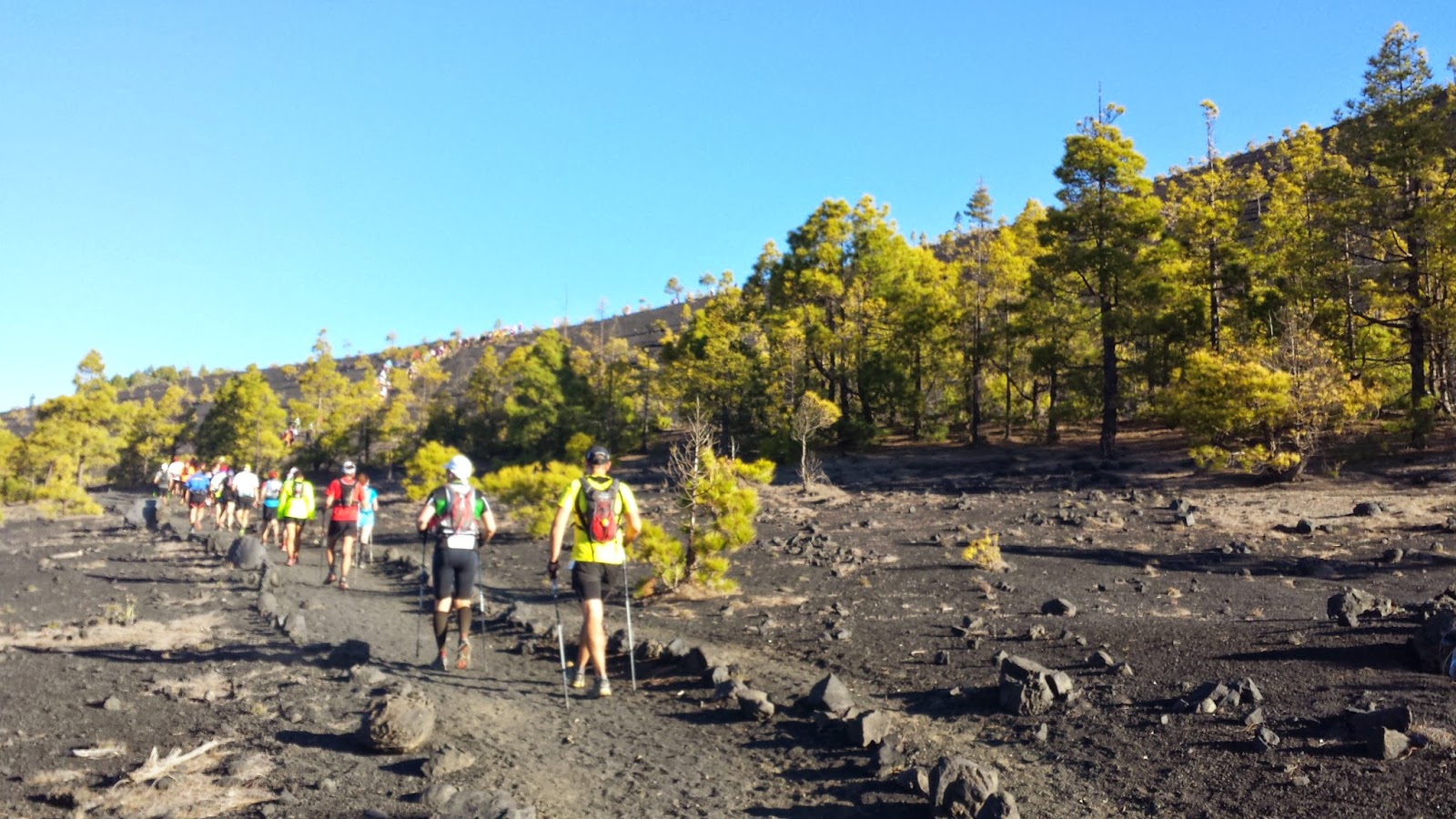 After reaching the highest point on the southern end of the island, the trail leveled off and became runnable, with a slight downhill trend. That pleasant diversion lasted only a brief time, as the trail began a series of saw tooth rises and falls toward Roque de los Muchachos at more than 8000 feet. There must have been 15 or so of these insidious climbs and descents, although it felt like there were a hundred. Each was relatively short, but the ascent was steeper than the first section, and the trail more difficult. As Roque de Los Muchachos was only at 8000 feet, I had wondered how the organizers arrived at the figure of 14,400 feet of accumulated elevation gain. Now I know. 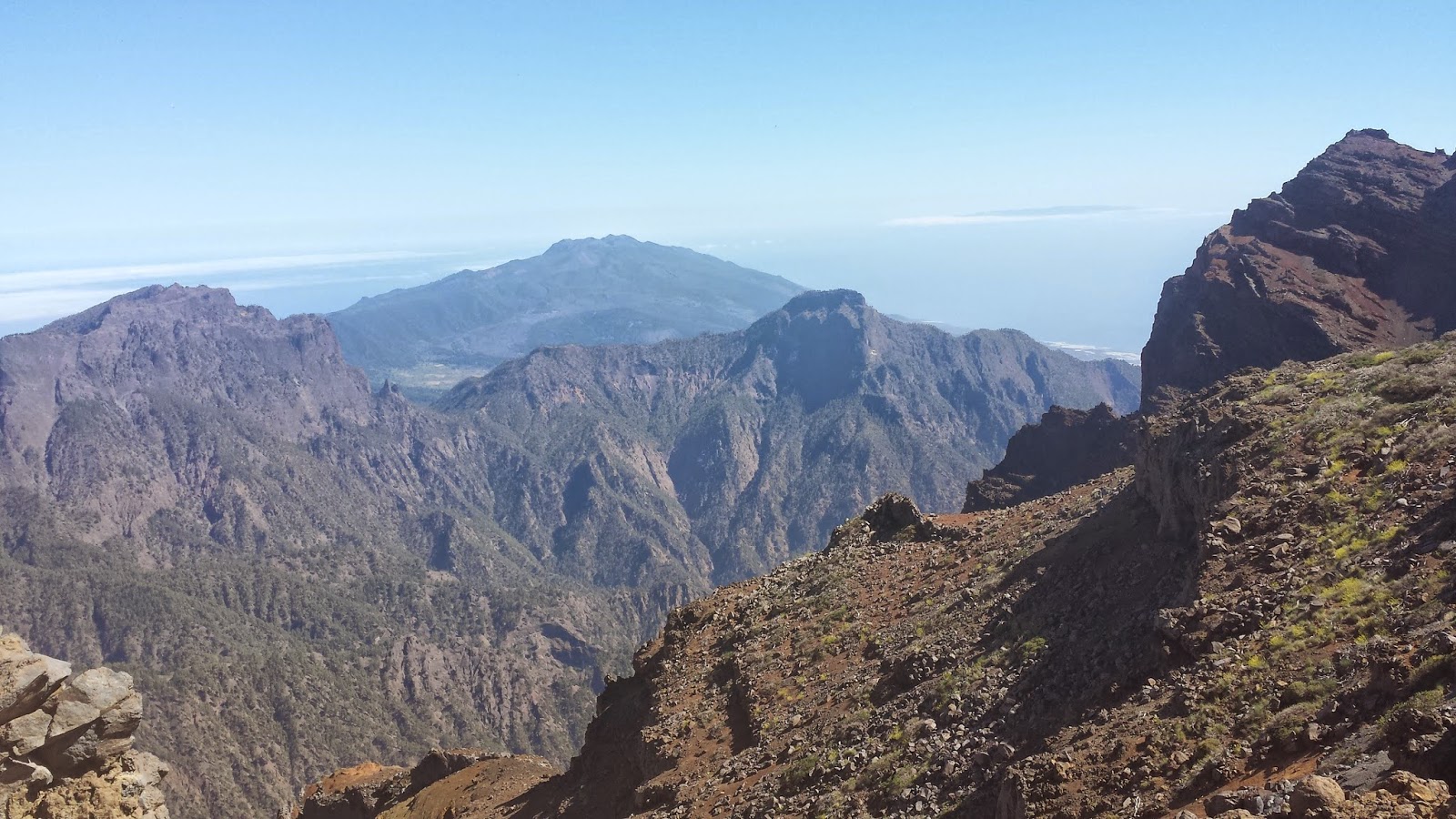 As runners approached Roque de los Muchachos, the volcanic origins of the island became startlingly clear. The Roque overlooks a massive erosion crater that must be 30 or 40 miles in diameter. If it were in the United States, and not on a remote Atlantic island, it would be a tourist destination second only in the national pantheon to the Grand Canyon, Yosemite and Niagara Falls.

From Roque de los Muchachos, the trail bent down on a 14-mile descent toward the finish line in the town of Los Llanos de Ariadne. If runners expected things to get easier during the downhill portion of the run, they were mistaken. The grades going down were even steeper than the hills climbing up, and they were strewn with jagged rocks and boulders. Many of the Spanish runners equipped themselves with ski poles and that proved a wise choice as it enabled them to move faster across the rocks with less chance of ending up with a broken cranium. 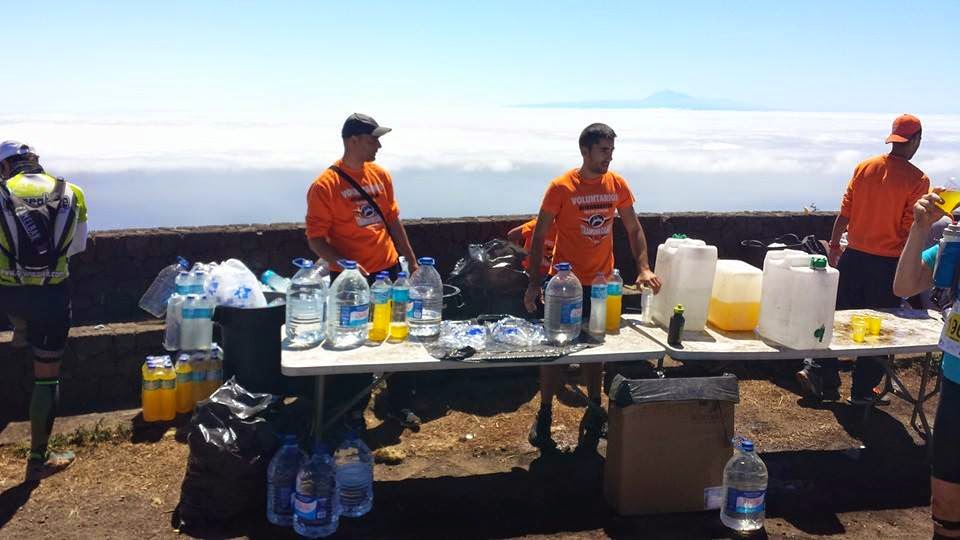 With eight or nine miles to go, the course entered a settled part of the island. Here, too, there was no let up. The course followed old river washes and thin trails that ran behind properties. These, again, were covered in irregular rocks.

With a mere 5K to go, the course entered the town of Los Llanos, but still there was no change in the terrain. Runners were shunted up a dried ocean channel—more rocks—and then directed up a series of cobblestone streets (perhaps the steepest hill of all) for the last 4K to the finish. 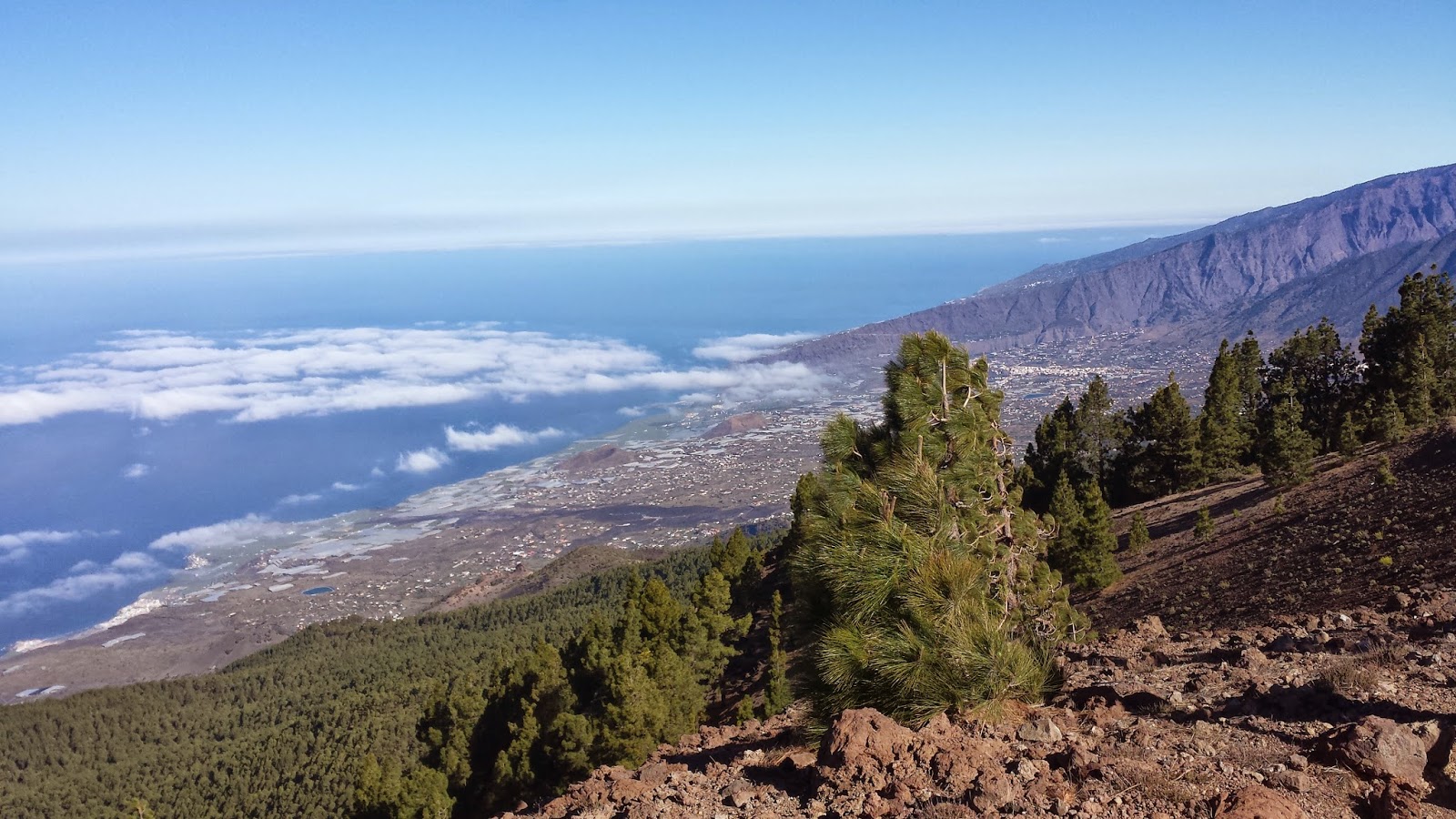 I had a long, tough day. The top of the first climb marked the finish for a shorter event, a half marathon. I was shocked to find that after 5 hours, we had only traveled 13.1 miles! When I reached Roque de los Muchachos—12 hours into the race—I was ready to quit. The last few saw tooth climbs had finished me off. I thought I had nothing left and doubted my ability to finish the race before that 18-hour cutoff. Ultimately, I decided to give it a go, concluding that I would rather have the race officials pull me off the course than give up myself. A half mile after leaving the Roque, my legs cramped badly (imagine that every muscle in your lower extremities is plastic wrap stretched to the maximum). That all but eliminated running for me, not that I would have done much on those rocky paths. If the cramps had set in before I left the Roque, I would surely have called it a day. Climbing that last torturous hill in Los Llanos, I was a wreck. With less than a mile to go, I sunk down on a stone fence and thought I would not get up again. A young race official, who did not speak English, looked me over and went to fetch help. However, after sitting for a few minutes I summoned the strength to get up and finished the race, coming in at 17 hours and 48 minutes and 5 seconds, less than 12 minutes before the cutoff.

The people of La Palma were tremendous. At every point where a road or driveway crossed the course people were standing there and calling “Animo! Animo! Vamos! Vamos!” As I struggled down the last few blocks toward the finish line—it was nearly midnight mind you—there were still people out on the street, men women and children, offering encouragement and high fives. That was good for my weary soul. 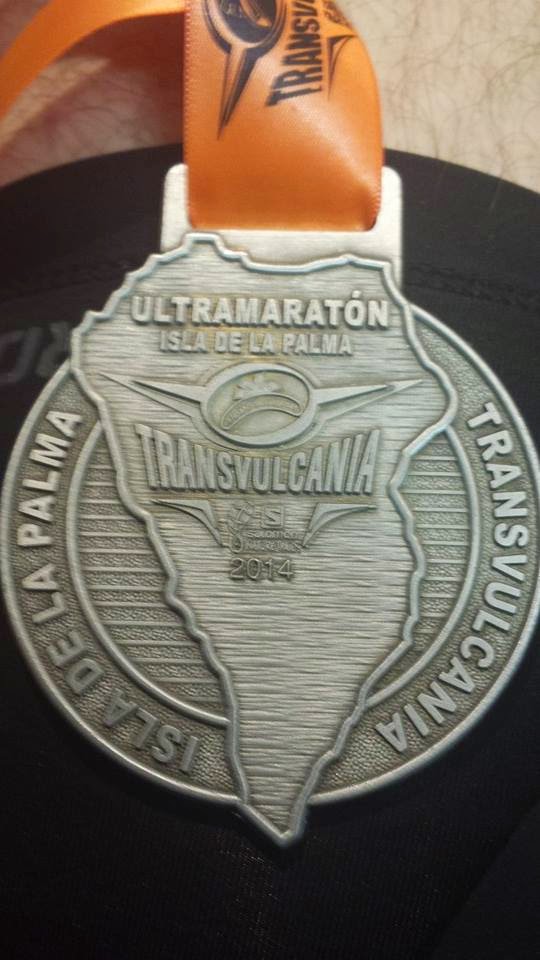 I missed the last bus for the hour’s drive back to my hotel. A desk clerk at a hotel in Los Llanos kindly phoned for a cab. It took the cab an hour and fifteen minutes to pick me up. (“A lot of people want to go places on Saturday nights,” the hotel clerk explained.) I arrived back at my hotel at 2:30 a.m., 25 hours after I had gotten out of bed. It was quite a roque-ing adventure.
Posted by Keith Gayhart at 7:26 AM