The start was brutal. Three-and-a-half K uphill into the teeth of a 20 m.p.h. wind  to reach the ice cap. It was 1-degree F. I was wearing a thin neck sleeve that could be pulled over the nose for warmth, but it felt as though I was breathing through an iron lung. When I pulled it down, snow whipped my face like sand. 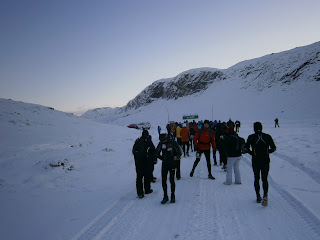 At the ice cap (wind chill -22), we made a 3K loop. It was a hallucinatory experience. Having run that part of the course the previous day, when it was 15 degrees warmer with no wind, proved useless. Nothing looked vaguely familiar in the swirling wind. Thoughts became confused, tangled, shattered. I had no idea where I was on the course; I just kept trying to make it to the next pole in the snow. I experienced all sorts of odd sensations. I thought my running tights had drooped, exposing my hindquarters. Worse, if you'll excuse the earthy description, I was quite certain my penis had frozen and would never regain functionality. 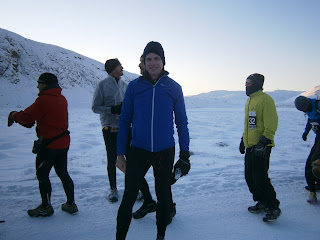 Once we left the ice cap and headed down the hill, the event slowly took on the contours of a normal human experience-at least a normal experience for long distance runners. By the time we reached the 12K marker, the clouds and wind had disappeared. The temperature soared to a balmy 15 degrees. We were also rewarded with breathtaking views of snow-swept mountains girding mountain lakes and meandering creeks. We had driven this road the day before, but to experience it from a runner's perspective was bliss of an entirely different order. 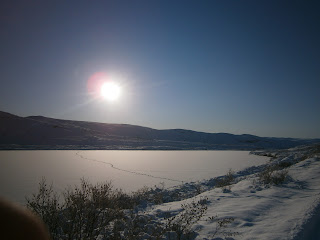 The balance of the course was composed of slowly rolling hills on a declining arc. The road was covered with hard packed snow that made an excellent running surface. In comparison with other marathons, this was a fairly easy course, except for that bit on the ice cap, and the cumulative effect of running in cold air and wearing relatively heavy attire. 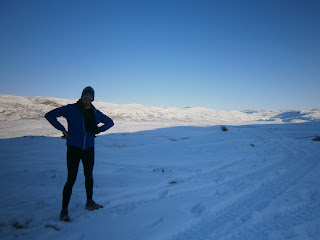 With 5K to go, the road topped a sharp hill and the ramshackle, pre-fabricated, virtually pointless hamlet of Kangerlussuaq came into view. Paris never looked so beautiful.  I became fatigued in the final stages, but managed to trundle to the finish to be greeted by a throng of two. The race was won by Torben Dahl from Denmark in the boggling time of 3:02:57, five minutes off the course record (set on a day, I'll wager, when the wind chill on the cap was something other than-22).
Kudos to Albatross Tours and the very friendly people of Kangerlussuaq (who manned the aid stations for hours) for running a spectacular event. Hats off to my 99 new BFFs from around the globe for their accomplishment and excellent comraderie, a swell bunch for sure. And, a special shout out to my wife, Linda Rosner, for supporting my choice to take this wild and chilly adventure. 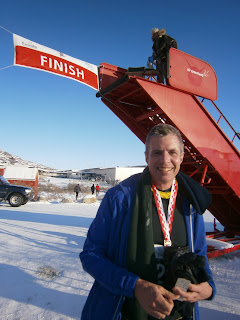 I arrived in Kangerlussuaq yesterday after the third of three soul-crunching flights. I'll say this about Scandinavian Airlines, the food is horrible, but they package it nicely. 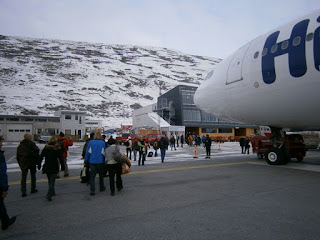 Within an hour of landing, we attended a short orientation meeting, then thirty of us packed into a vehicle the size of a UPS truck and headed for the Russell Glacier. The truck stalled two miles outside town, but a trio of Toyota SUVs were sent to our rescue. 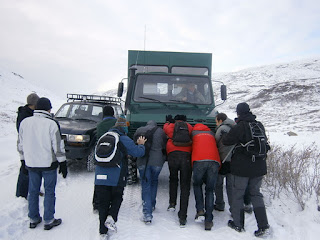 The Russell Glacier is a mammoth river of ice feeding a flow from the ice cap to the Watson River. At the point of entry, the glacier fractures and looks like shattered granite, with a cool, blue glow caused by trapped oxygen. While we were gaping at it like the looney tourists that we were, a large sheet broke loose and crashed into the river with a thunderous roar. 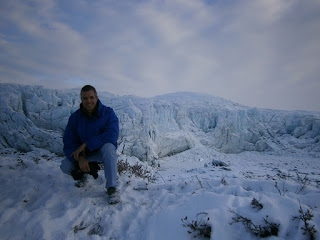 When we returned, we were treated to a Greenlandic barbecue, consisting of quickly braised muskoxen, reindeer and lamb, sausages, and just enough vegetables to make us feel like civilized creatures. And, no, muskoxen does not taste like chicken. It's more like dog, though less tender. 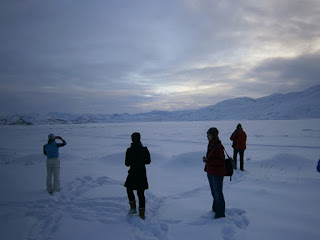 Today, we toured the marathon course, driving a 19-mile road to the ice cap. The topography reminded me of the California desert-rugged, rolling hills dotted with scrubby foliage-only, of course, it was covered with snow and the temperature was ten degrees, a notable difference. As we climbed toward the ice cap, the road grew steeper (it's significantly hillier than I expected), the mountains loomed taller, the snow deeper.  Last year, the race was run in unusually warm conditions. The road was bare. That is not the case this year. It's white powder the whole way-the purest, driest snow I have seen in my life. 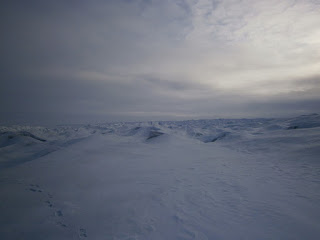 At the ice cap, we tumbled out of our vehicles to inspect the course. What a sight! It is a Sahara of gently rolling snow drifts, stretching to horizon. I took pictures, but they are feeble imitations. I have run in some beautiful places-the Grand Canyon, Big Sur, Santorini-the ice cap is the equal of any of those, but the spaciousness, the silence and the solitude sets it apart. That will stay with me forever. 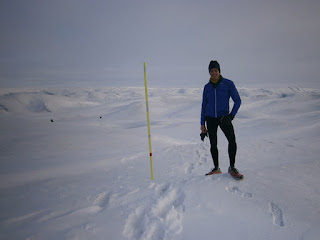 Over dinner last night, an Irishman advised me to wear my running clothes under warmer garments for the tour today so that at the ice cap, I could strip down and run it, testing my gear. I thought that was excellent advice and did as he suggested. I was the only one to do so (including my new Irish friend). I'm glad I did it. The ice cap was covered with a thick layer of snow. At times, I plunged into it up to my knees. Very difficult running. But, it allowed me to determine that I had the right gear and that he cold was not going to be a factor. I finished brimming with confidence. 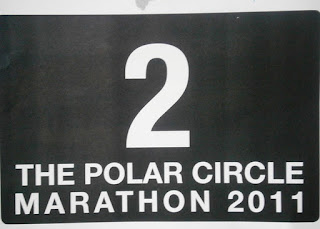 Tomorrow, I'll learn if that confidence was misplaced.

As the days before my departure for Kangerlussuaq have slipped away, I've undergone a curious transformation. The prickly feelings of nervous anticipation that have been building over the past 50 weeks have floated off like dark clouds on a spring morning, replaced by a cold and enveloping sensation of terror.

Not having visited Greenland before and having accumulated precisely zero cold weather running experience has hardly kept me from forming a number of cock-sure beliefs about the environment, the course and my performance. 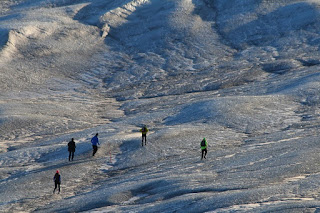 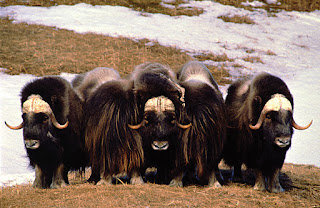 
My Polar Adventure is hitting the road. On Tuesday, I fly to Copenhagen, arriving Wednesday afternoon. The following morning, I and 99 other madcap marathoners will board a plane for Kangerlussuaq. (If you refer to a map, you'll note that my travel route is a bit like flying from Los Angeles to Toronto by way of Krakow.)

I expect to tour the Russell Glacier on Thursday and review the race course with my new mates on Friday. The real test of nerves and frozen family jewels begins bright and bitingly early on Saturday.

If technology serves me well (a 3% likelihood), I'll be blogging here and posting photos to Facebook and Picasa at annoyingly frequent intervals. 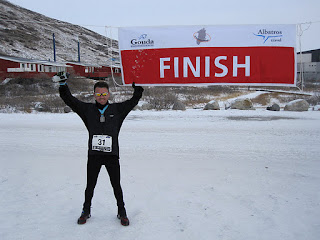 I look forward to seeing you all in sunny Southern California soon.
Posted by Unknown at 2:44 PM 5 comments:

I was not athletic as a child. In gym class, when it was time to pick teams for softball, kids with broken arms were selected before me. At the beach, 99-pound weaklings kicked sand in my face. I was constantly teased for being soft, slow and sissified...by my mother. 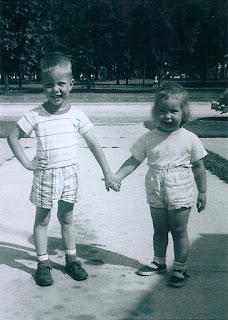 That pretty much held true for me up to middle age. Then one day, when I was 45-years-old, I ran across Robertson Boulevard (to buy a bagel) and immediately doubled over wheezing and out of breath. I felt I had to do something. So that same day, I joined a gym. I mounted a treadmill, flipped it on and promptly fell off. 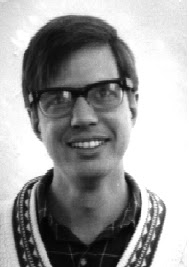 Ten years later, I heard a 2-minute story on NPR about a marathon on the ice cap in Greenland. The reporter described it as an insanely frigid event attended by the most hard-bitten, devil-may-care athletes. The news hit me like a bolt of lightning because, having by then completed nearly 40 races of marathon distance or longer, I knew it was something I could do. In fact, if I could have teleported to Kangerlussuaq, I was pretty confident I could have run the course that day. It was a very empowering revelation. So much so, that had Arnold Schwarzenegger, Jesse Ventura and Hulk Hogan happened along at that moment, I would have kicked sand in their faces. 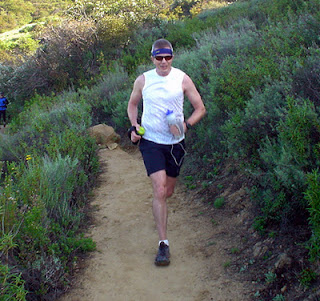 Now, it would be shallow and immature if I were travelling all the way to Greenland simply to exorcise a demon from the eighth grade. The truth is, I've put all that behind me and have learned to embrace running as an opportunity to stay fit, commune with nature and enjoy the company of my friends. In fact, if I could have one wish it would be to have some of my old pals from junior high school there with me in Greenland so that we could together experience the magic and excitement of striding up to the start line of an incredible race...right before I kick their butts.
Posted by Unknown at 3:01 PM No comments:

Jared Diamond in his excellent book Collapse describes the quixotic attempt of Norse to colonize Greenland around the turn of the first millennium. The island was given its counterintuitive name by Erik the Red, a vicious marauder, imaginative p.r. man and ancient patriarch to yours truly. Erik used the image of a verdant Shangri-La to lure his gullible fellow countrymen across the North Atlantic in creaky wooden ships. What they found was hardscrabble land, biting cold and nary a green shoot or twig in sight.

Remarkably, they made a go of it for more than 400 years. But their tiny communities never really thrived and, eventually, they died out. (Legend claims they hightailed it to Tahiti.)  As Diamond explains, farming was tough and resupply from Scandinavia erratic. Most crucially, the Norse failed to acquire a taste for the one food source in abundant supply: fish. 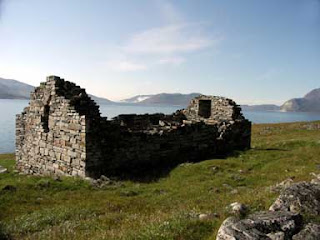 In just a few weeks, I'll be retracing the journey of the ill-fated Norse colonizers to take part in the Polar Circle Marathon-only I'll be doing so in considerably more comfort. I'll travel to Greenland by plane, stay in a modern hotel and dine in a pleasant restaurant with an agreeable menu and passable wine list. I will be braving the cold for the 4 1/2 hours or so that it will take to run the marathon, but I'll be driven to the start in a mammoth ATV, snugly attired in Gortex, and plied with hearty soups and hot beverages every few miles by race staff. 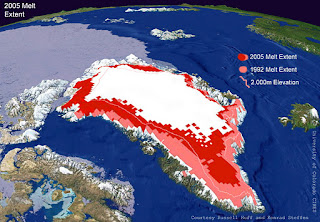 This will provide me with a once-in-a-lifetime opportunity to witness the magnificence of the Arctic. And I'm lucky to be visiting now as Greenland's vast ice sheet and towering glaciers are slowly melting...due to the fossil fuel consuming lifestyles of people like me who travel in planes, ride in motor vehicles, reside in temperature-controlled buildings and eat two servings of beef per day.


Erik the Red would be amused.
Posted by Unknown at 1:37 PM No comments: